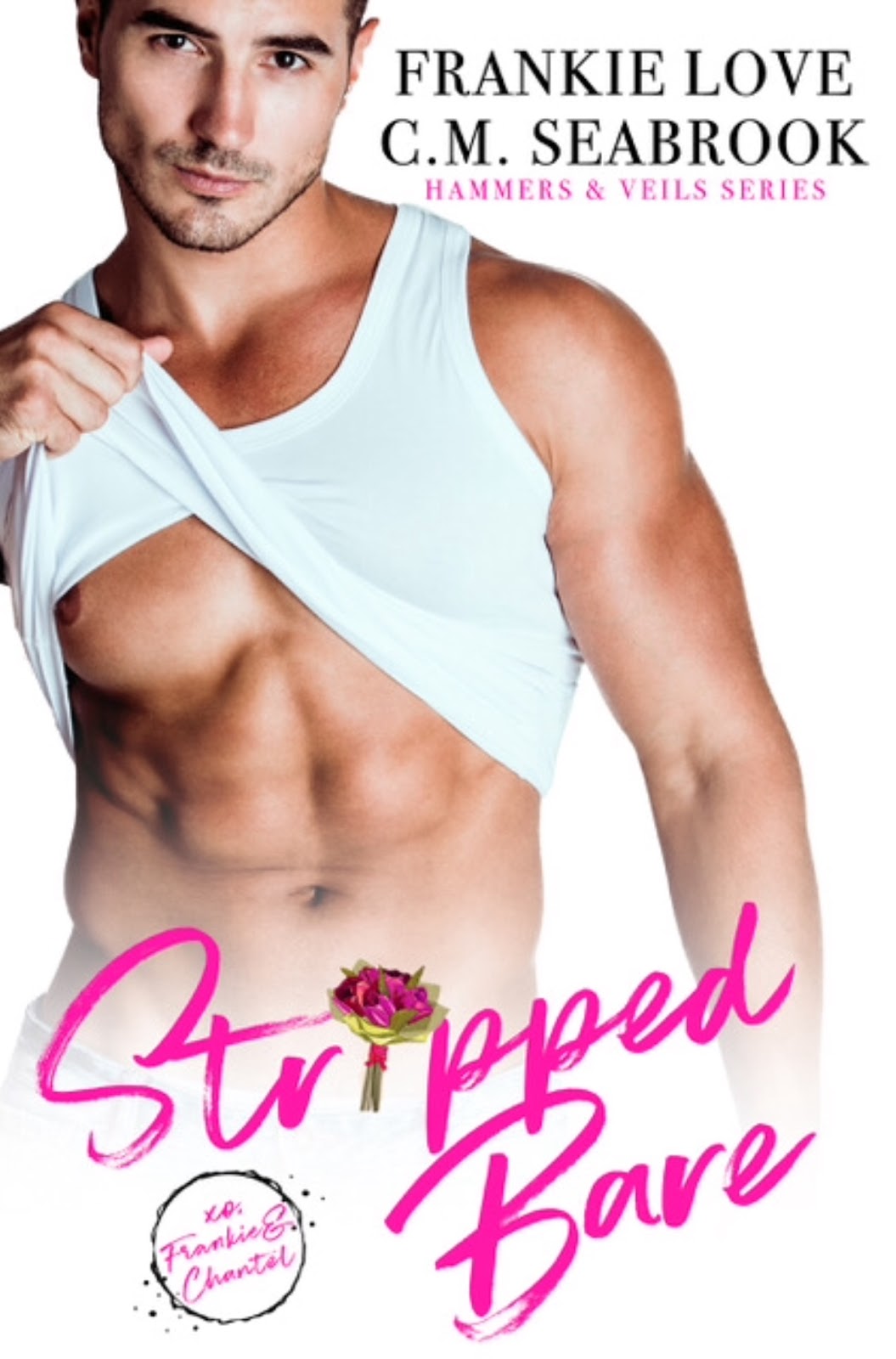 I work with my hands … and Karis Quinn is the only thing I want to touch.
She’s curvy, cute-as-a-cupcake, and way too sweet for a hard-ass like me.
When I’m hired to renovate her bakery, I want to do more than strip these floors and make them shine.
I want to make Karis scream my name.
Over and over again.
She may be a virgin, but I’ve got a hammer.
And I know how to use it.Dear Reader,
Filthy, over-the-top, and the perfect treat.
This one is true love at its finest.
Eli Blake is a blue-collar alpha with more than a tool belt.
This man knows how to seal the deal and put a ring on it.
xo, Frankie & Chantel

Hammers and Veils is a series of short and flirty stories sure to make you melt!

“Tell me again why I’m doing this job barely at cost?” I grumble into my cell as I park my truck in front of the small bakery with a sign that reads For Heaven’s Cakes. I have a hundred other jobs I should be doing today, especially now since Nailed It Construction, Inc., has finally taken off.

I can’t wait to try and explain to my business partners how my little sister conned me into free labor.

“Because you’re the best big brother in the whole world,” Jenna says on the other end. “And I’m sure you’ll get some free cupcakes out of the deal.”

I grunt and open my door, moving around my truck to get my tools out of the back. “So who is this friend of yours?”

“Karis Quinn. She’s a real sweetheart. She’s just had some…bad luck lately. Her boyfriend said he’d do the work for her. But he only did half the job, then took off with the full payment.”

“Nice guy,” I mutter, the story sounding all too familiar.

“He’s a real dick. But now, if she can’t get these renos done, she might lose the shop, and if she loses the shop—”

“Yeah, I get it,” I say with a sigh. My sister knows exactly what buttons to push with me. I’ve always had a hard time turning my back on someone in need, which is how I ended up with a one-eyed Husky named Rooter, and a three-legged German Shepherd I nicknamed Pogo.

Another favor for Jenna after she spent the summer before sophomore year volunteering at an animal shelter. Call me a bleeding heart, but I couldn’t stand her tears when she discovered the dogs were going to be put down.

Not that I regret bringing those two mutts home with me. They’ve been by my side through a lot of shit.

“Oh, and Eli, don’t forget Mom invited us to dinner on Sunday. She wants us to meet this new guy of hers, Jason or Jeremy. He sounds…okay, I guess.”

I give a harsh snort. “Jason was two boyfriends ago. The one who emptied out her bank account before taking off with Nana’s engagement ring. And if by okay, you mean he isn’t part of some gang or cult, and doesn’t have a criminal record that competes with Ted Bundy, than meeting the guy is a waste of time. She’ll be on to the next asshole who treats her like shit in a week.”

“You’re so hard on her. She’s just trying to find happiness. It’s not her fault that the guys she’s dated are—”

She laughs. “Yeah. But aren’t most guys? You being the exception, obviously.”

“Obviously.” I chuckle. For all my sister’s romantic notions that real love and loyalty still exist, I know that watching our mom go through a never-ending string of guys, has done a number on her. At twenty-two, she’s still never had a real boyfriend. And being her overprotective brother, I’m totally okay with that.

Lights turn on inside the little bakery and I see movement behind the counter. “Time to get my good deed done for the day. I’ll talk to you later.”

“If it’s another favor, forget it.”

“I was just going to say that I was serious when I said you’re the best big brother a girl could ask for.”

I give a harsh grunt, but I can’t help the way my chest swells. “You’re not bad yourself, kid,” I say before ending the call.

Time to work. The front door opens when I push on it, and a bell tinkles above my head as I walk through.

“Hello?” I call out, the scent of sugar and spice wrapping around my senses and making my mouth water. It’s been a long time since I’ve had sweets. Being a single guy, my diet pretty much consists of anything I can toss on the grill.

My mom was never the baking type. But I have good memories of spending weekends at my nana’s house, cupcakes cooling on the counter while I licked the batter from the bowl.

“I’ll be right out,” a woman’s voice, as sweet and sugary as the smells drifting through the shop calls from the back.

I place my tools on one of the tables and take a good look around.

The place is way worse than Jenna hinted at. Wires hang from the walls and ceiling, not to mention that whoever did the drywalling did a shit job. It all needs to be taken down and redone. And that’s not even the worst of it. Someone started tiling the floor, but what’s done is so uneven it’s a tripping hazard. There’s no way this place will pass code.

I grumble under my breath and drag a hand over the scruff on my jaw. This isn’t just a day job. There’s at least a week’s worth of work to be done. And the amount I agreed to do it for won’t even cover the cost of materials.

“Best fucking brother in the world my ass,” I mutter. “More like the most gullible.”

“Did you say something?” That same sweet voice is closer now, and I start to turn, ready to tell the woman that there’s no way I can do this job for what she’s paying me. But my breath catches in my throat when my gaze lands on the curvy little redhead.

Green eyes widen when they meet mine, and soft, pink lips part slightly like she’s just as affected by me.

My heart pounds as I look her over. It’s been a long ass time since I’ve felt anything even close to this. The desire to wrap my hands around her waist, drawing her close is fierce.

My cock twitches as she steps toward me. I try my best not to let my gaze drift down, but those curves are too delicious not to notice.

Damn, the woman is gorgeous. And I want more than just a taste of her cupcakes.

But then I remember what Jenna told me about Karis Quinn. The bastard who left her shop in such a disaster was her boyfriend, or I guess ex-boyfriend, if my sister is right about the guy taking off with the money she paid him before the job was done.

Anger builds inside me. Not just for the con-artist of a man, but that the beautiful woman in front of me could be played so easily.

“You must be Eli,” she says breaking the silence. “I’m Karis.” She holds out her hand, but I know the dangers of taking it. If the attraction is this strong with a couple feet between us, I can’t even imagine what touching her would do to my already hard cock.

She drops her hand when I don’t take it. It’s not that I don’t want to, but I have a feeling her skin would be as soft as her voice. Not sure I can handle getting weak in the goddamn knees on a job site.

“I really appreciate you helping me out,” she says, her pink tongue slipping over her full lips.

I grunt, knowing there’s no way I’m leaving this cupcake shop without a bite of something sweet. Screw the labor and material costs. Getting to renovate this place-to strip this shop bare-down to its bones, is my pleasure if Karis is here.

“You really don’t mind? I know it’s a mess…” Her voice trails off and she wrings her hands. Anxious. Nervous. There’s a hint of red to her cheeks.

“Cleaning up other men’s messes is apparently my specialty,” I tell her gruffly, not wanting to reveal my desire. Fuck, I’m here to work, not nail the client. But damn, I would. “Now show me what you want to be done.”

Frankie Love writes filthy-sweet stories about bad boys and mountain men. As a thirty-something mom who is ridiculously in love with her own bearded hottie, she believes in
love-at-first-sight and happily-ever-afters. She also believes in the power of a quickie.

You can find her at FRANKIELOVE.NET or on FB.
Frankie also writes under the pen names CHARLIE HART.