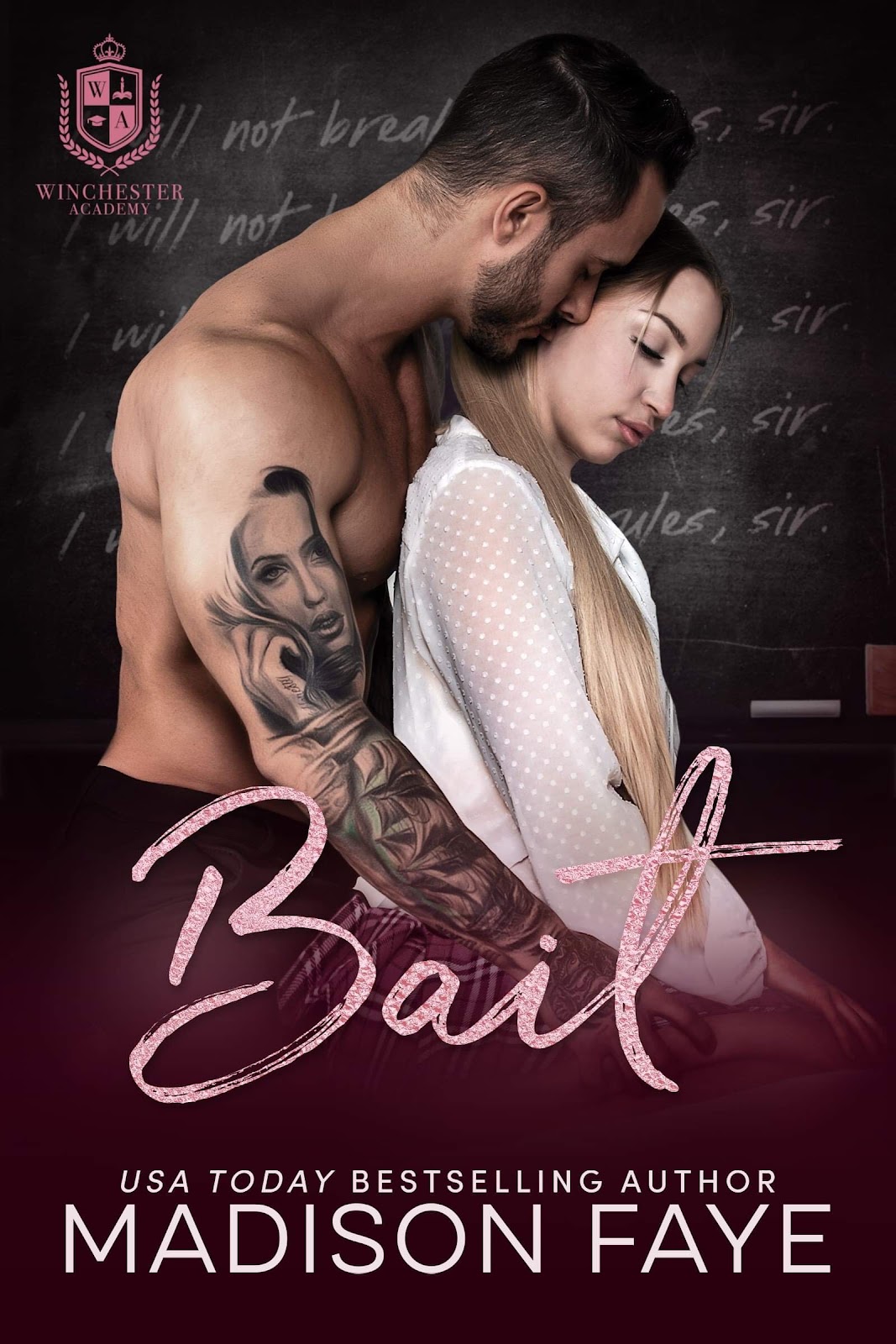 WOWZA! Bait lives to its name and it is HOT! So steamy that I had to put my kindle down to cool down a few times over! I am telling you friends, it has been a long time since since I have read book with that much heat in it. The dominant and the seductress. You cannot help but see what will happen next. You also get something unexpected from these characters. You want to read something hot and yummy? Bait is it for you! 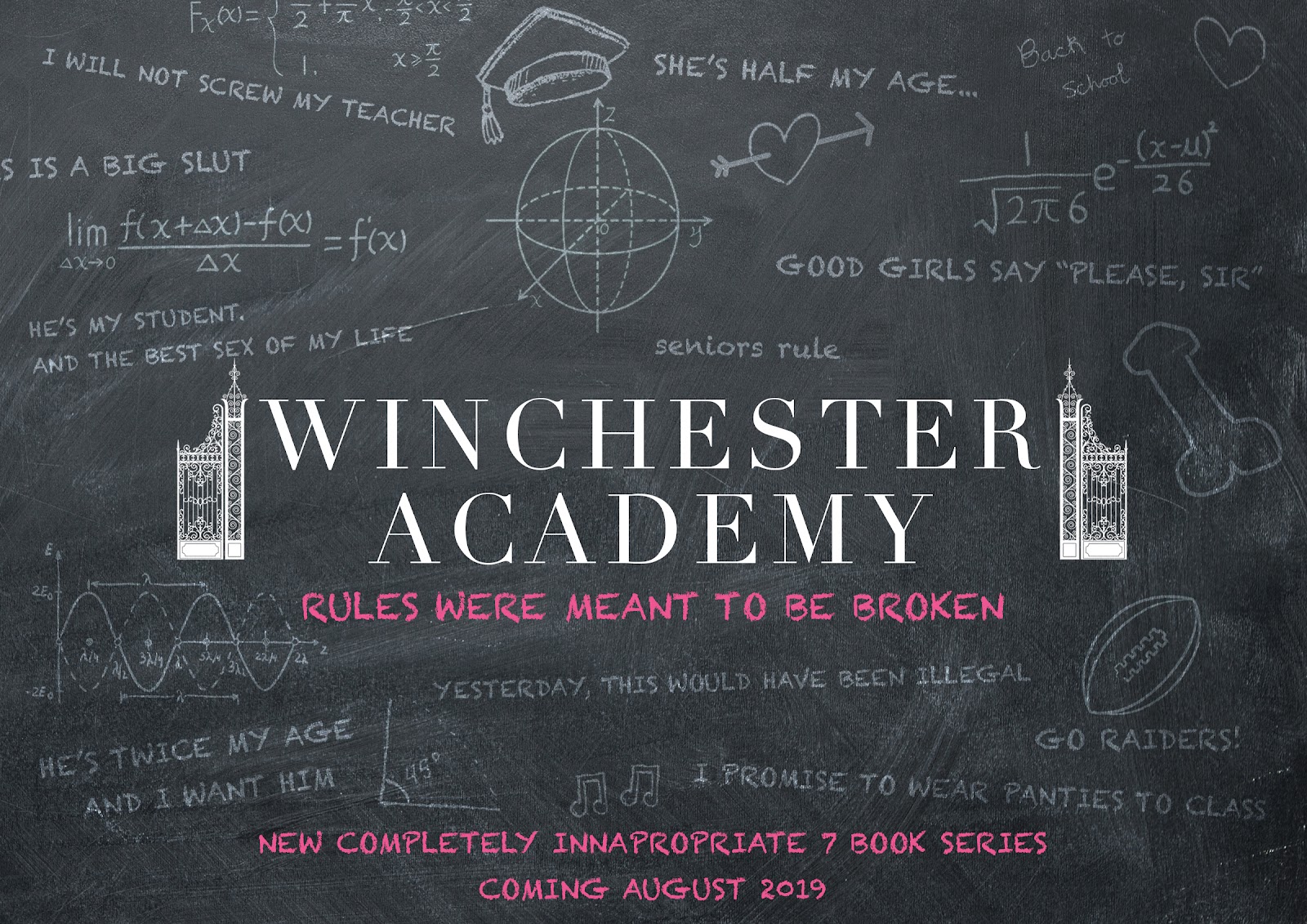 There’s bad, and inappropriate, and scandalous, and wrong.

And then there’s giving your virginity to your gorgeous and dominant high school government Professor, on his desk, five minutes after you turn eighteen.

Winchester Academy is home to a lot of things – the spoiled rich kids of the world’s elite, ivy-covered walls, typical high school drama and angst, and him – Professor Oliver Bard. Dominant, alpha, and completely freaking gorgeous.

I know he looks at me, even if he sees me as forbidden fruit—tempting, off-limits jailbait. But I’ve been obsessed with him for way, way too long, which is why I purposefully got myself thrown into his infamous “midnight detention” on the eve of my eighteenth birthday.

Just the two of us, alone, watching the clock tick down.

This could ruin him, and put a scarlet letter on my back. But once I feel those big hands on me, and once I get a taste of his perfect, forbidden mouth, and once he shows me things I’ve only ever dreamed about while imagining him, I know there’s no going back.

I know I should say no, but that’s a little hard to do when his mouth and hands and…well, other things are only making me scream “yes, professor”… 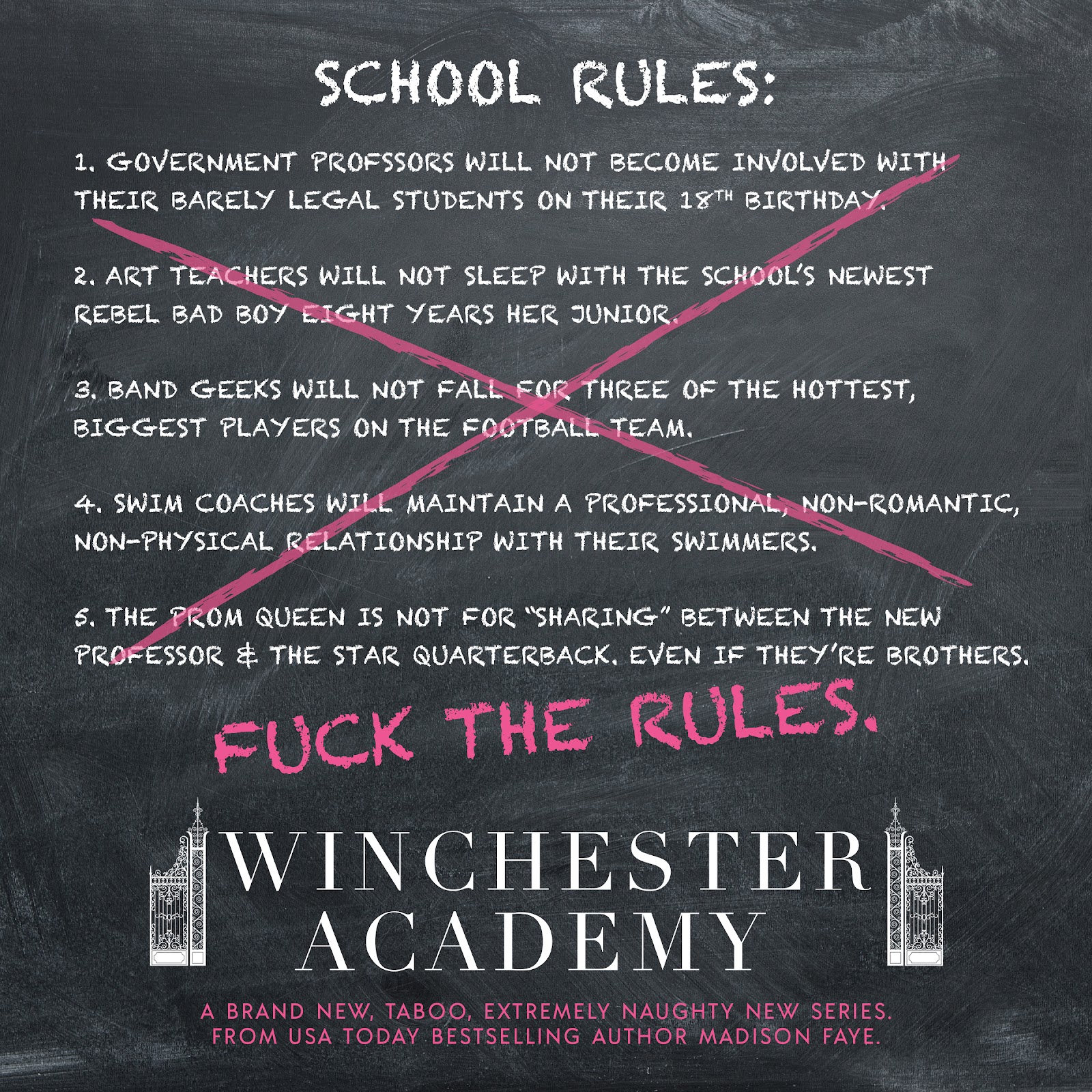 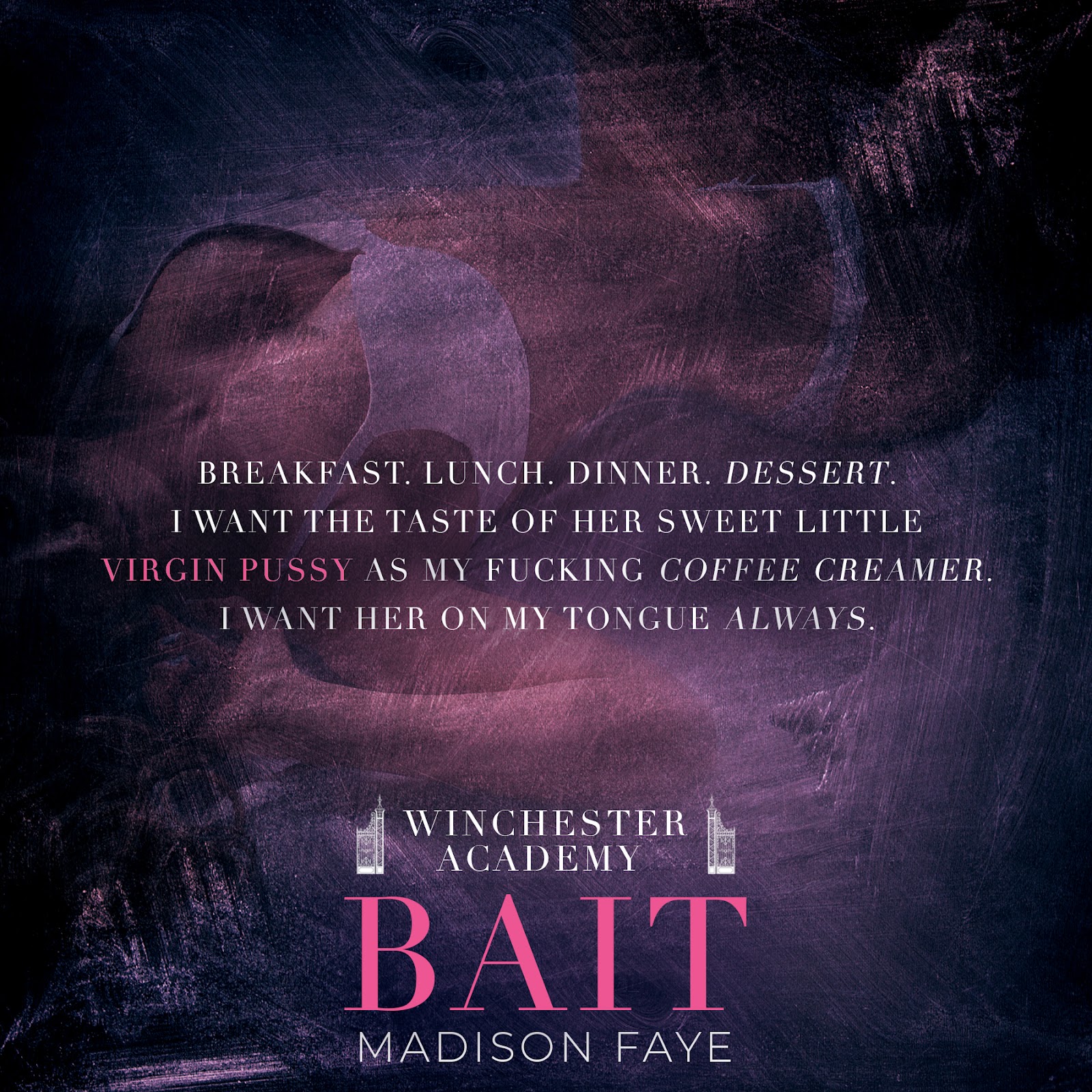 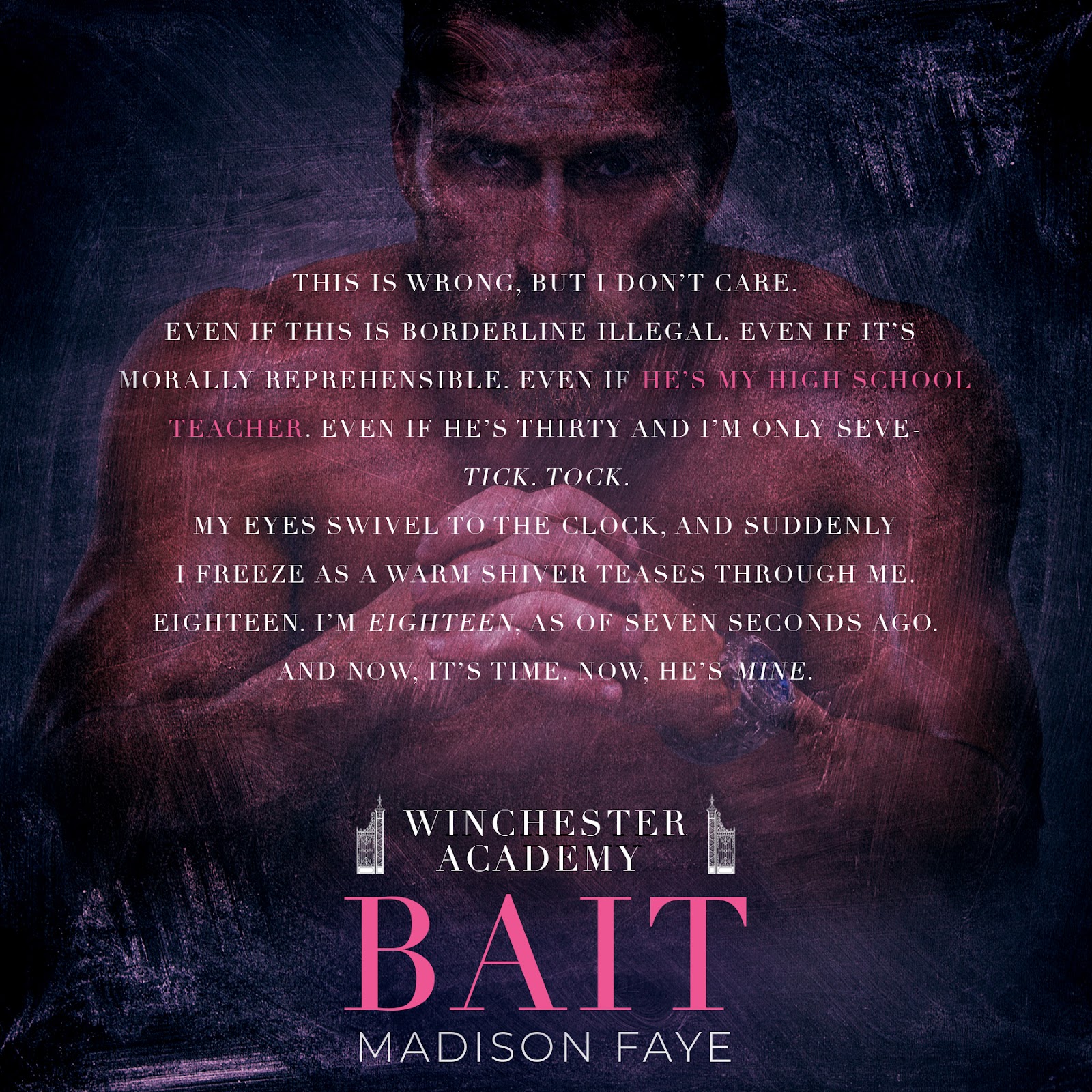 USA Today and #1 Amazon bestselling contemporary romance author Madison Faye is the dirty alter ego of the very wholesome, very normal suburban housewife behind the stories. While she might be a wife, mom, and PTA organizer on the outside, there’s nothing but hot, steamy, and raunchy fantasies brewing right beneath the surface!

Tired of keeping them hidden inside or only having them come out in the bedroom, they’re all here in the form of some wickedly hot stories. Single-minded alpha heroes, sinfully taboo relationships, and wildly over-the-top scenarios. If you love it extra dirty, extra hot, and extra naughty, this is the place for you!

Pre-order today! Amazon: https://amzn.to/2HeWRs2 Amazon Worldwide: mybook.to/AllIAskCM Apple Books: https://apple.co/31KBAQs Nook: http://bit.ly/31JTRxx Kobo: http://bit.ly/2Sl4xj5 Google Play: http://bit.ly/31KvuzA Audible: https://amzn.to/2SH9Ckw Add to Goodreads: http://bit.ly/31MMp4u
“A superbly written and beautifully haunting love story, that is gut wrenching and raw. These characters, this story—it will stay with you. Brava.” -- Trilina Pucci, author We Are Us, an all-new, edge-of-your-seat and compelling love story from @taraleighbooks is out now! Download your copy today → http://bit.ly/2SZFq5v #newrelease #weareus #availablenow #igreads #amreading #taraleigh #booknews #romance #bookstagram @socialbutterfly_pr
SERIES SALE!!! The bestselling Santiago Trilogy by @catherinewiltcher is on sale for a limited time only!!! Start the series for FREE, then books 2 & 3 are only 99c + FREE in Kindle Unlimited!!! "This is not your sweet, passionate love story. This is raw, deep down in your soul passion" - Up All Night With Books “Sexy, edgy and full of suspense… An epic love story” – Just Let Me Read “A heart-pounding, stomach-churning, fabulous read” – Nerdy, Dirty & Flirty #1 Hearts of Darkness – FREE for a limited time! US: https://amzn.to/2S70aVh UK: https://amzn.to/2VAND3i CA: https://amzn.to/2O7OKBO AU: https://amzn.to/346hy3p I’m the light to his dark: an investigative reporter intent on exposing dangerous men like him. We were worlds apart until I caught his attention. Now I’m his captive, kept at the whim of a devil with no kindness or morality. #2 Hearts Divine - 99c for a limited time! US: https://amzn.to/382AFwv UK: http://amzn.eu/d/4HFbKKf CA: https://amzn.to/2HGBPmC AU: https://amzn.to/2VnbKkH FREE in Kindle Unlimited The FBI is forcing me apart from the man who haunts my dreams. The man who stole me, broke me and made me his forever. Dante Santiago. My deepest, darkest secret. The man I will never ever betray. #3 Hearts on Fire - 99c for a limited time! US: https://amzn.to/2T03Sng UK: https://amzn.to/2W29Djo CA: https://amzn.to/3bXEVk8 AU: https://amzn.to/32hGeWy FREE in Kindle Unlimited He came into my life like a raging storm. The man I despised. The killer with no conscience. I fell as hard as a woman like me can fall. When he bleeds, I feel his pain. When we kiss, I taste his tragedy. When he kills, my heart is stained with all the colors of his vengeance. #santiagoseries #catherinewiltcher #seriessale #freebook #booksale #bargainbooks #heartsofdarkness #heartsdivine #heartsonfire #mafiaromance #enemiestolovers
"Carly Phillips brings on the swoon. A must read." —Natasha Madison, USA Today Bestselling Author Better Than Sexy, an all-new steamy standalone romance from New York Times bestselling author @carlyphillips is available now! Download your copy today → http://bit.ly/2PjTrZL #newrelease #availablenow #booknews #carlyphillips #bookstagram #booksofinstagram #igreads #amreading @socialbutterfly_pr
★★★ BRAND NEW RELEASE ★★★ From New York Times and USA Today bestselling author Donna Grant comes a new story in her Dark Kings series… DRAGON LOST is available now! ✔️Read it Now: https://amzn.to/2JO3ROt Watch the Trailer: http://bit.ly/37TmkST Destinies can’t be ignored. No one knows that better than Annita. For as long as she can remember, it's been foretold she would find a dragon. A real-life dragon. She’s beginning to think it was all some kind of mistake until she’s swimming in one of the many caves around the island and discovers none other than a dragon. There is no fear as she approaches, utterly transfixed at the sight of the creature. Then he shifts into the shape of a thoroughly gorgeous man who spears her with bright blue eyes. In that instant, she knows her destiny has arrived. And the dragon holds the key to everything. All Royden wanted was to find an item his brother buried when they were children. It was supposed to be a quick and simple trip, but he should’ve known nothing would be easy with enemies like the Dragon Kings have. Royden has no choice but to trust the beguiling woman who tempts him like no other. And in doing so, they unleash a love so strong, so pure that nothing can hold it back. **Every 1001 Dark Nights novella is a standalone story. For new readers, it’s an introduction to an author’s world. And for fans, it’s a bonus book in the author’s series. We hope you'll enjoy each one as much as we do.** ➣ Follow Donna Grant on Bookbub: https://www.bookbub.com/authors/donna-grant ------- #Bookish #BookRecs #TBR #ReadingList #Bookthings #Readinglist #Bookstagram #ReadersofInstagram #ReadersofIG #BookLove #Readers #BookList #Reading #ebooks #bookbuzz #AmReading #BookWorld #InkslingerPR #BookNerd #BookAddict #romancereader #BookLovers #standalone @InkslingerPR #1001DarkNights #IGreads @dgauthor @1001DarkNightsBooks
It’s hard to get in—but it’s hell getting out. Wrecked With You, an all-new sexy and suspenseful standalone in the Stark Security series by New York Times and #1 International bestselling author J. Kenner, is releasing April 21st! Check out the sizzling hot cover revealed yesterday on Frolic! Pre-order your copy today! Amazon: https://amzn.to/2HwJEeC Apple Books: https://apple.co/38znq7y Amazon Worldwide: http://mybook.to/wreckedwithyou Nook: http://bit.ly/2Hud90v Kobo: http://bit.ly/2Pf3pM3 Google Play: http://bit.ly/2OY3tzy Check out the full article on Frolic → http://bit.ly/WWYFrolic He's spent a decade chasing shadows. Ten long years tracking down the man who kidnapped him as a child and murdered his mother and uncle. And finally, Antonio Santos has found him. All he needs is access to the exclusive private island. A carnal wonderland that only the elite can enter. But to gain access, Tony needs two things. The significant fee. And a woman. An experienced operative with deadly skills, Stark Security agent Emma Tucker has no desire to be Tony’s arm candy, especially when she’s still reeling from a breakup. But the more she works with Antonio, the more she admires him. And when the island’s games push them over a sensual cliff, she can’t deny that his skills top the charts in the bedroom, too. Bit by bit, admiration leads to passion as the mission twists and turns. Soon, they become lost in this island playground full of lust, greed, and danger. Where they could both lose their hearts … or their lives.
Follow Crystal's Book World on WordPress.com
%d bloggers like this: